First outing this ‘Magic May’ was back to the traditional nightingale haunt at Lee Valley with Isabelle. Unfortunately the satnav took me a different car-park and from there I didn’t know how to get the same spot as last year! However after a longer than usual walk we found our way to the familiar area near Bittern Hide, but we ran out of parking time, and legs, to get to the same place we’d heard nightingales the year before.

Neverthless we heard two Cuckoo and saw one in a tree as we had lunch by one of the creeks. We also saw plenty of Garden Warbler at 70 Acres Lake near the footbridge, a great place for them.
The second and last outing was to RSPB Rainham Marshes for pond-dipping with Isabelle again and after that a walk around about a third of the reserve. We found greater pond beetle, dragonfly nymphs and lots of back-swimmers during the dipping, and on the mini-beast hunt, mosquitoes found us!

Birds heard and seen at the Woodland Discovery Centre, while we were pond-dipping, were Lesser Whitethroat, Song Thrush (I also found a snail anvil with lots of broken snail shells), Chiffchaff and the first of several Cetti’s Warbler (I even saw one later).

On the way back from the pond-dipping, we took a detour through the cordite storage area because of a singing Cuckoo, but we, and others there, did not see it.

During lunch we sat on a bench overlooking the marshes and saw plenty of activity, including Redshank with chicks, a couple of Sand Martin and House Martin, Swift, Kestrel and one or two Water Rail grunting and squealing from nearby reeds.

Only one outing, but for a couple of ‘magical’ May birds.

During my first spell in London (2005-2011) Lee Valley Park was a good place for Nightingales and Cuckoos, amongst others. On returning to London in 2016, I took my eldest daughter during half-term to see if they were still there and we were treated to the amazing song of a nightingale during our lunch. A couple of Kingsfishers were also piping while zipping up and down one of the creeks and a cuckoo called from the other side of the lake.

I also recorded returning Swift from the garden on the 25th.

Only a couple of outings for this 'magic' May. After a family move back to the UK, birding time was hard to come by. The first of the month I was out to the occasional patch at Tyttenhanger where I saw over 50 species, the most notable being Peregrine Falcon. Also both Ringed and Little Ringed Plover, Dunlin, and plenty of warblers including Garden, Whitethroat and Lesser Whitethroat, as well as site speciality Tree Sparrow.

Towards the end of the month, during a family outing to a horse sanctuary, I saw a Hobby scaring the Barn Swallows.

A hot and quiet month with only two Leverett Pond patch visits.

The first visit caused some mild excitement as I mis-identified a non-breeding/female Green-Winged Teal as a blue-winged teal; the latter being more unusual than the former. A couple local birders visited after my initial report and took much better pictures and picked out more features than I had been able to, good to know for future reference. 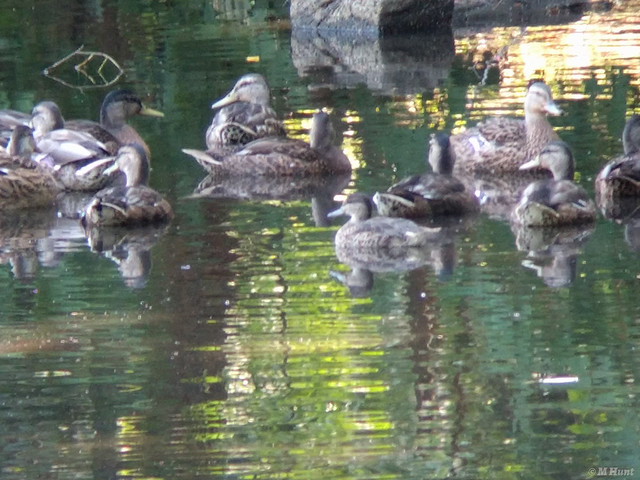 The second visit was with a new camera lens, the Canon 100-400mm USM II. Despite its heaviness it was worth carrying around as I managed to get some good photos including a juvenile Black-Crowned Night Heron. 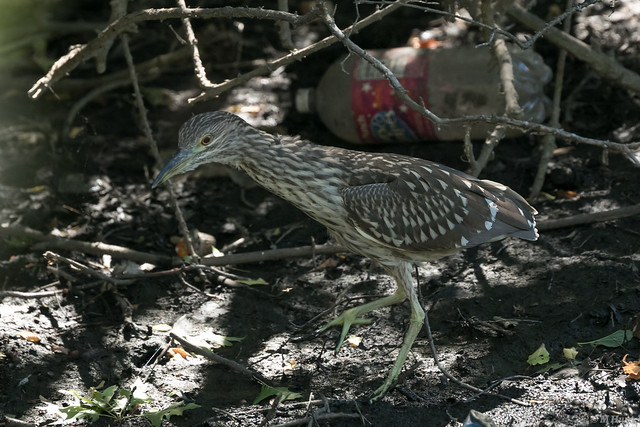 After the intensity of May I eased off in June and focused on adding a few Suffolk county ticks by visiting Belle Isle Marshes. It's a very good spot, the best in Suffolk according to eBird species logged, but only my second visit. It was later also cast under a cloud after reports of a fatal assault and police warnings about visiting! Nevertheless I was able to add Willet, Greater Yellowlegs, Killdeer, Semiplmated Sandpiper, Least and Common Tern, Snowy and Great Egret.

Towards the end of the month I made a patch visit.

The first week in “Magic” May began quietly at Olmsted Park, with the continuing Green-Winged Teal, Blue-Headed Vireo and 2 Eastern Phoebe on the 2nd.
I went to Ward’s Pond (3rd) after I saw an eBird report recording lots of migrants there, but I only saw 2 Eastern Phoebe, engaged in what I assumed to be courting/territorial behaviour, nesting Canada Goose and already fledged young Mallard - fast movers! I then went through to Willow Pond, following up on report of a Prairie Warbler which I did see; a site-tick.

Back at Leverett Pond the next day (4th), for excellent numbers of swallows: Tree, Northern Rough-Winged and Barn Swallow all in attendance, the latter a site-tick. There was also a Blue-Headed Vireo again and a singing Orchard Oriole. I was also tipped off that the Red-Tailed Hawks were nesting on one of the softball field’s floodlights and I was able to confirm that they were! It’s a pretty busy spot, especially on the weekend, but these urban hawks seemed completely unperturbed.
The week ended with a Brown Creeper on the 6th.

The weekend was quiet apart from a flyover Osprey, a site-tick. This is a species I assumed that I would see much more regularly on the patch, considering how popular it is with the wildfowl, however it hadn’t turned out that way.

The next week also started quietly, however I did see an excellent site-tick Broad Winged Hawk on Monday, 6th. It flew over towards downtown Boston, hovering in the wind at one point. That day there were several other reports from the area so it seemed it was their day for migration. Also notable were 8 Barn Swallows and an Orchard Oriole in its usual spot.
On Wednesday, 11th, things had picked up. FOY Northern Parula in the yard at home, and more warblers at Leverett Pond too. Northern Waterthrush, Common Yellowthroat, Northern Parula, Black-and-White Warbler, Magnolia Warbler, Yellow Warbler, Yellow-Rumped Warbler and Black-Throated Green Warbler all in attendance, as were a couple of Spotted Sandpiper. A Wood Thrush was also heard singing, as was a site-tick Rose-Breasted Grosbeak; the former was not visible in the trees and the latter was mobile from one side of the pond to the other and I didn’t see it either.

Thursday 12th, initially revealed no additional species but as I rounded the south-side of the pond I got a glimpse of another long hoped for site-tick: Belted Kingfisher. It flew low across the water, out of sight, but soon returned to perch on shaded trees quite high above the water. Another species, like the Osprey I had expected to see more of, however on seeing it at the pond it got me thinking. There were lots of people around, and with its size and the lack of dense vegetation around the sides of the pond that it seemed to favour, maybe it’s not such a big surprise that it doesn’t frequent the pond more often. There’s not much space for it to be secluded and fish in peace.
At the weekend I saw a few additional site-tick migrants: Great Crested Flycatcher, Ovenbird and Wilson’s Warbler. The latter two I just heard, the former was high in the trees foraging and occasionally singing/calling. Also notable was a FOY American Redstart.

One other notable for the week: on Friday 13th, I saw another Osprey, this time from my home, soaring high over towards the Emerald Necklace. Funny how often you don’t see something for ages then see two or more one after the other!

The new week began with no new arrivals, though Blue-Headed Vireo and Northern Rough-Winged Swallow seemed to be getting late.
However, Tuesday was probably the best day of the whole season. All the previous warblers were in attendance. I was able to linger in the dell where I picked up a site-tick Least Flycatcher in the thick brambles near the concrete blocks. A Swainson’s Thrush was also flushed by someone walking through with a dog. I then heard a different song and as I focussed my attention in that direction, up popped a site-tick Lincoln’s Sparrow! It moved around discreetly in the area and didn’t seem to notice me which allowed me to grab some record shots while admiring its intricate plumage, and I then left, well satisfied. On the way out another Wilson’s Warbler calling but again not seen.

A 40 species day from Leverett, which left me feeling pretty satisfied that I had seen the best of what the site has to offer in spring.

The next day things went back to ‘normal’ though I only had 25 minutes to look.
I returned on Friday, and as if to confirm that I had experienced the best day already, the flycatcher and sparrow were not present. However there was one notable new arrival in Chestnut-Sided Warbler which was singing from the south-side of the pond. New arrivals of a different sort - 4 fledged Wood Duck with their mother were swimming on the pond too.

Also that week, at home in Brookline, FOY Common Nighthawk on Wednesday, 18th.

The next week, I went out twice on the Thursday because I heard a lot of birdsong during a brief morning walk and wanted to return with more time to convert the potential into sightings. At Leverett Pond in the morning, I saw 2 Chestnut-Sided Warbler, both singing, as were Black-Throated Green Warbler, Magnolia Warbler and Yellow Warbler.
When I returned in the afternoon, I visited the 3 main parts on my patch - Leverett, Willow and Ward’s - and decided to log them all under Olmsted Park. The birdsong activity had died down somewhat but notable were a FOY Blackpoll Warbler. In contrast to last year these were scarce this year, with only one or two recorded.

At the weekend I joined a BBC walk around Plymouth Airport, which was my second visit after a trip in July 2015. This trip was much better because of the earlier time of year and for being allowed to walk beyond the fence with the group. All target grassland species were seen: Eastern Meadowlark, UPLAND SANDPIPER, GRASSHOPPER SPARROW and Vesper Sparrow. Also notable were BLACK-BILLED CUCKOO and 2 flyover Peregrines.

The last outing of the month to the patch and I found an Eastern Wood Peewee in the dell, another site-tick, as well as a “Traill’s Flycatcher” on one of the Brookline-side islands.

I was very satisfied that my plan to really work Leverett had paid-off. From the broad-winged hawk to the peewee I saw a lot of great migrant site-ticks and felt that my understanding of the site and its potential species had been expanded. I ended with 101 eBird species logged there, second on the all-time list.
Posted by M Hunt at 02:13 No comments: